Stage One - Bring in the Moment - A Zen Story 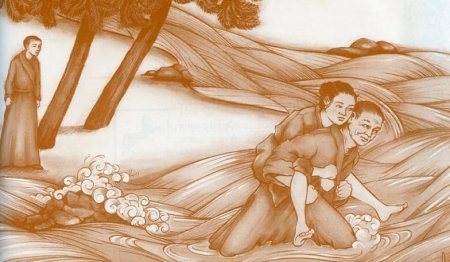 A senior monk and a junior monk were traveling together. At one point, they came to a river with a strong current. As the monks were preparing to cross the river, they saw a very young and beautiful woman also attempting to cross. The young woman asked if they could help her cross to the other side.

The two monks glanced at one another because they had taken vows not to touch a woman.

Then, without a word, the older monk picked up the woman, carried her across the river, placed her gently on the other side, and carried on his  journey.

The younger monk couldn’t believe what had just happened. After rejoining his companion, he was speechless, and an hour passed without a word between them.

Two more hours passed, then three, finally the younger monk could contain himself any longer, and blurted out “As monks, we are not permitted a woman, how could you then carry that woman on your shoulders?”

The older monk looked at him and replied, “Brother, I set her down on the other side of the river, why are you still carrying her?”

Can you relate this to your own life?

Meditate to become in the moment. There is never NOTHING going on.

This website uses cookies to improve your experience while you navigate through the website. Out of these cookies, the cookies that are categorized as necessary are stored on your browser as they are essential for the working of basic functionalities of the website. We also use third-party cookies that help us analyze and understand how you use this website. These cookies will be stored in your browser only with your consent. You also have the option to opt-out of these cookies. But opting out of some of these cookies may have an effect on your browsing experience.
Necessary Always Enabled
Necessary cookies are absolutely essential for the website to function properly. This category only includes cookies that ensures basic functionalities and security features of the website. These cookies do not store any personal information.
Non-necessary
Any cookies that may not be particularly necessary for the website to function and is used specifically to collect user personal data via analytics, ads, other embedded contents are termed as non-necessary cookies. It is mandatory to procure user consent prior to running these cookies on your website.
SAVE & ACCEPT